Awful Purdies is an Iowa-City based all-woman folk band that has embarked on an ambitious and multi-dimensional, collaborative ag project. 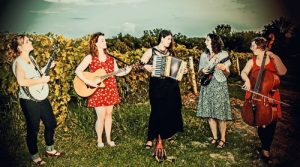 In their own words published in Edible Iowa River Valley:

“As folk musicians, telling the stories of our lives and the lives of the people around is right in our wheelhouse, so when we were invited by playwright Sean Lewis of Working Group Theater to write five songs for a new play called All Recipes Are Home about food and farming we decided to make a full album and thought it would be better for us to write songs that came out of stories of real people. So, with the help of a grant from the Iowa Arts Council and the Iowa Department of Cultural Affairs (who receive their funding from the National Endowment for the Arts) we have been gathering source material from farm/food production workers from around the state.”

See more details about this project which is much more than music, in the article and at the Awful Purdies website. Watch for the release of their project in April 2015!