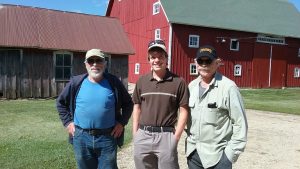 Bob and Dick Blazek and their sister Jane, are facing the challenges of growing old. They’re also facing the desire to leave a legacy. At the SILT Showcase Day Aug. 28, the brothers described their values and goals for their farm, which includes a large, well-tended farmstead surrounded by more than 100 acres of rented land near Lawler.

Sitting out of the wind in their renovated barn where Dick reminisced about tending a wide range of livestock, the brothers described how they now use it for farm to table dinners that Bob, a chef, serves up to neighbors and friends. They want future farmers to use the land with the same values they had growing up, including diversity in crops and relationships with customers and the community.

Farm Specialist Joe Klingelhutz passed out sample Land Walk Reports he develops for landowners interested in what table food their land wants to grow. Guests and hosts held a lively conversation about crops, conservation easements, the weather (of course!) and more. One guest was turning 100 years old in just a few months! He was there with his son, who had driven him from Northwest Iowa where dad had acquired land since he first started farming in 1946.

Sign up for SILT updates to get the latest news on next year’s Showcase Days and other events. Interested in a Land Walk Report? Contact Joe Klingelhutz at joe@silt.org.