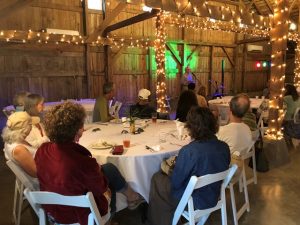 Nearly unpredictable storms dropped inches of rain all across Iowa as party-goers took their chances to attend the SILT Solstice Party at This Old Barn in Fairfield June 20.

More than 40 people braved the weather to hear John Ikerd speak about SILT’s role in building a truly sustainable food economy, Steve McLain play a moving rendition of Ikerd’s song Ioway, eat an incredible meal prepared by SILT President Stuart Valentine and a team of helpers and hear the stories of SILT from around the state.

“There was literally a rainbow ending in Fairfield as Paul and I drove here tonight,” Executive Director Suzan Erem told the crowd. “And I think a lot of people treat Fairfield like the pot of gold at the end of the rainbow, because you walk the walk, but tonight you’ll hear stories of people from all over the state who have given more than we could ever imagine raising here tonight.”

Erem then told the story of Joe Driscoll’s donation of his farm in Honey Creek for half of what it was worth, and his commitment to then try to raise the funds SILT borrowed to save the farm. They heard about Lyle Luzum’s family donating their 170-acre farm in Calmar because his family had never factored their farm into their finances.

SILT is growing everyday. When we treat land like a common good instead of a commodity we can build a true and and lasting local, healthy food system. Please join today for a stronger Iowa tomorrow.