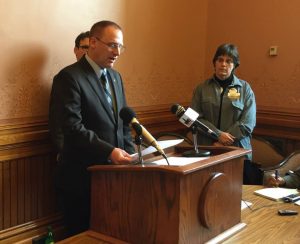 Leaders of the Sustainable Iowa Land Trust and the Iowa Farmers Union, as well as other legislators attended the briefing which was covered by Radio Iowa, Associated Press and others and picked up across the state.

“I’m a Republican and a farmer. This is not in any way, shape or form, an anti-agriculture effort,” said Kaufmann. “In fact I think for a lot of farmers, this is a good thing. It puts money into their pockets.”

“I’m an Iowan and I like to eat good, healthy food,” said Bolkcom. “It’s important because we have a growing local food movement.”

Various radio stations including on Iowa Public Radio and in western Iowa.