SILT has been making the news across Iowa, nearly coast to coast! 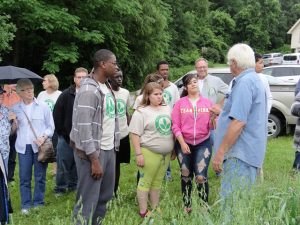 In mid-June, the Council Bluffs Daily Nonpareil covered SILT’s “breaking new ground” party at the Loess Hills Young People’s Farm, SILT’s first acquisition ever with a nice feature including photos of this amazing farm. Kudos to the reporter tackling a complicated transaction. Now begins the 3-year campaign to raise the funds to make this farm a permanent part of the Council Bluffs/Omaha metro area foodshed! (Donations earmarked with “Young People’s Farm” welcomed on our Donate page!)

A few days later, the Tipton Conservative, a weekly newspaper just 40 miles east of the Mississippi, ran this story at the bottom of the front page. Sen. Grassley has since sent a more specific response to SILT Board President Suzan Erem’s request to make permanent the current tax incentives for donating easements. Grassley said that even though there’s broad support, he doesn’t expect it to get out of his committee. If you’d like to contact him about this, you can reach him at Chuck.Grassley@grassley.senate.gov or 202-224-3744.