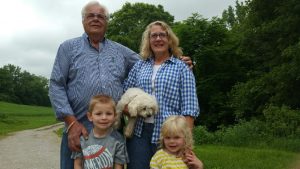 Joe and Susan Driscoll with Beast and grandchildren Kinnick and Penelope. The peacock didn’t make it into the picture!

UPDATE: With agreement from the original donor, this farm is now for sale with a SILT easement attached to the deed. If you’re interested in affordable land near Omaha/Council Bluffs to grow healthy table food see this page for details

Dubbed the “Loess Hills Young People’s Farm” by (previous) owners Joe and Susan Driscoll, the Honey Creek farm is nearly 100 years old, but Joe was about to lose it when he contacted SILT just before we launched in late January. Joe, a lifelong architectural restorationist whose work includes Omaha’s Rose Theatre and projects across the country, spent decades trying to invent better, healthier and even energy-efficient plasters. That dream almost cost him his farm.

Trying to make the world a better place 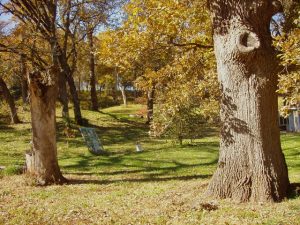 Some of the oaks in the savanna at this farm.

Joe grew up on this farm his father bought almost 100 years ago. He remembers when pigs roamed under the oak savanna and the delicious food his family raised. As a young adult he moved away, but he returned to the Omaha/Council Bluffs early on, settled in and became a craftsman. Joe renovates the cracked and broken plaster in old, decaying buildings and brings out the beauty of the original artwork and design.

He knew Portland cement was a horribly unhealthy product to expose himself and others to, so he worked to create better, safer cement. Later in his life, he worked on an interior finish material that would absorb thermal energy during the day and release it at night.

His invention traveled a long way to get its patent, but eventually was derailed. In the meantime, Joe had put his farm up for security. By the time he contacted SILT, he had subdivided it to sell off 53 of the most beautiful and productive acres so he and his wife Susan could retire debt-free. He was headed into that awful decision where he would either sell to a wealthy professional who would turn it into an estate or watch his farm get auctioned off to a nearby conventional farmer for pennies on the dollar.

That’s when Joe heard about SILT. We have no staff and no money to buy his farm, but we did have a few great supporters and our pending tax exempt status. And Joe’s persistence and passion were inspiring. We contacted a rancher in California we had met at the Slow Money National Gathering for an investment possibility: Could she buy us time to raise the money we needed to pay off the bank and get Joe what he needs to retire? She agreed to finance SILT for three years and we don’t owe her any payments until the loan is due.

The joy and challenges ahead 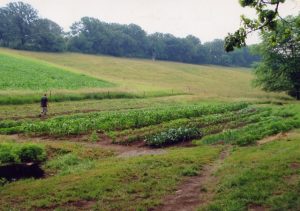 Much of the tillable land can move into vegetable production by next spring if the right people step up.

Now at 71, Joe has a new dream, that young people, immigrants and people of all backgrounds will grow healthy food at the Young People’s Farm. And SILT can fulfill its mission of getting a next gen farmer on that land so close to a vibrant healthy food market.

Joe has agreed to raise the $330,000 SILT needs to secure the land in the next three years (the sooner the better since interest in accruing!) He’s looking to large donors, foundations and anyone who can help. (He can be reached at joehoneycreek[at]gmail.com) In the meantime, he has been meeting with community groups in the Council Bluffs/Omaha area getting them excited about his vision of young people planting their food in good, healthy soil and watching it grow.

SILT leaders including area residents Denise O’Brien and Melvyn Houser will work with Joe, local organizations and farmers to transition the farm to healthy food production.

SILT is now accepting donations toward securing this farm for good. Donate here and please indicate that it is for the Young People’s Farm project. Thank you!